Darwin will remember the anniversaries of a series of bombing raids that took place during 1942 as it approaches the 70th Anniversary of the Bombing of Darwin on 19 February 2012. The bombing raids during WWII continued for nearly two years across Northern Australia after the initial attack on Darwin in February 1942.

Former Adelaide River army nurse Alva Curtis, who now resides at Esperance in Western Australia, clearly remembers the raids, which coincided with a full moon. “Planes didn’t have the technology then that they do now so the pilots relied on the light of the moon to know where to bomb. “Darwin was bombed every full moon. Whenever the siren went off, it was lights out, under our beds and no one was allowed to smoke - everyone smoked back then.”

Alva had more than a couple of close calls during the 21 month-long raid on Australia’s north and recalls one time where she spent more than five hours in a dugout trench. “We were travelling back to Adelaide River when we were stopped at Winnellie by troops who said the planes were coming. It was only 6:30 in the evening but boy those planes came.

“They (the Japanese) were dropping ‘daisy cutters’ and it lasted hours. When we thought it was safe we got back into the jeep and had another go, but we didn’t get too far before we had to make another run for it. “It was easily midnight before we made it home and the matron was very pleased to see us safe. We weren’t in trouble as we thought we may be, but we weren’t given the next day off either!” Alva affectionately recalls.

This month’s remembrance is in lead up to a series of commemoration events that will take place from February 11 to 26 next year.

The main event will mark the 70th anniversary of the first bombing of Darwin to be held at the Darwin Cenotaph on 19 February 2012. The two-week program will include commemorative ceremonies, a schools competition and exhibition, historic talks, tours and movie screenings, the release of a commemorative coin and an AFL football match. 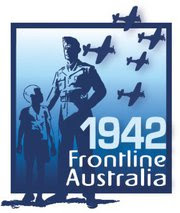 Posted by Inside History magazine at 11:42 AM