In our Issue 12: Sep-Oct 2012 edition, we travel to Lord Howe Island with the HMB Endeavour on its journey to re-enact Captain Cook's voyage to Tahiti for the Transit of Venus in 1769. And what a trip it was to the island nestled in the Tasman Sea off Australia's east coast with its long history. 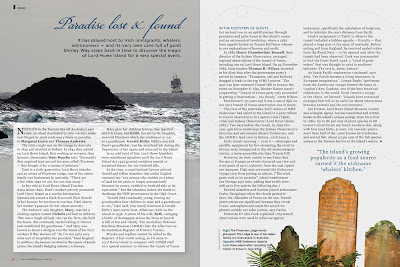 Click for a sneak peek at Issue 12. Paradise lost & Found

In addition to our article on heritage travel to Lord Howe, we spoke to the Master of HMB Endeavour, Captain Ross Mattson, and he gave us an insight into what it is to sail on and captain the replica of the iconic ship - a ship that was so pivotal in Australia's modern history.

Interview with Captain Ross Mattson - Master of the HMB Endeavour

[Q] What was a typical day for the captain and crew? Did you try to follow the routine from Cook's time? Did you use any of his original journals or tools?
A. The ship follows the traditional three-watch system where our voyage crew sail the vessel as Cook would have done over 240 years ago. Crew are allocated a watch where we work 4 hours on, 8 hours off 24/7. While the ship has 21st-century safety equipment and certain modern conveniences, it is fairly "raw" as there is no mechanical assistance for setting our 10,000 square feet of sail so we are very dependent on training our voyage crew who often have no sailing experience in order for us to sail. We even have hammocks instead of bunks so it is very easy to fully immerse yourself into what it was like for early European seafarers. For our transit of Venus voyage, while we sailed to Lord Howe Island instead of Tahiti, we were still able to give a historical feel to the voyage by having a historian and astronomer onboard who used traditional tools and practices to make astronomical observations.

[Q] Did you feel an affinity with Cook himself? Do the cramped conditions on the Endeavour help you to relate with the original crew?
A. There is not a day that goes past that there isn’t a reflection or affinity for what Cook endured. Yes, we do have engines for safety as well as keeping to 21st-century timetables, but they are reluctantly used. So we are totally dependent on the wind, crew and conditions for us to sail and when there is a critical decision to make, often with sail and/or vessel handling during inclement weather, I often reflect on what Cook have done.

Cook also had a rapport with his crew and of course the scientific party. When we sail, we have 16 professional  crew, 36 voyage crew (sail trainees) and four supernumeries (passengers), so there is quite a diverse demographic of 56 personnel in total. While the responsibility of the vessel navigation and wellbeing of the crew is paramount, there is a strong emphasis on crew moral. A good ship is a happy ship.

[Q] Was there any stage when you thought you wouldn't make it?
A. This particular voyage to Lord Howe Island was very difficult due to the time frame to make the transit. We had to be at Lord Howe on a particular day and time. Unfortunately we experienced one of the worst low pressure systems that the NSW coast had experienced for some time. Not far from Lord Howe the seas were up to 15 metres! Fortunately with good weather forecasts we were able to avoid the full force of this weather system, but we still encountered 60 knot winds and 8 metre seas.

To use Cooks infamous words as far as the ships integrity is concerned he wrote in his journal "no sea can harm her" and after experiencing some fairly heavy weather with our recent 13-month voyage around Australia I would concur, but ensuring an 18th-century vessel meets 21st-century deadlines particularly with the conditions that we experienced, had its difficulties.

[Q] How do think your voyage has helped to bring a better peace with our indigenous community?
A. On our recent circumnavigation of Australia we developed a partnership with the Department of Education, Employment & Workplace Relations to fund berths for Indigenous Australians on board. We also flew the Aboriginal and Torres Strait Island Flag throughout the voyage and were welcomed by numerous indigenous communities all around Australia. The word reconciliation was used on numerous occasions, but to have this firsthand experience of meeting different indigenous communities, developing friendships with our indigenous crew and to fly the Aboriginal and Torres Straight Island flags on the replica of Cook’s ship was very significant. I believe we have played some role in this very important story of modern Australian history.

[Q] How did stave off scurvy during the trip?
A. Fortunately we do have a modern galley (kitchen) and a very competent chef who made sure that we always ate our fruit and greens!

[Q] Do you feel that you've contributed to Australian history?
A. Most definitely. People who come out on board and sail with us are fully immersed in early European maritime history. We often have lectures on board to teach and show traditional practices of navigation, sailing, weather and general history all relating to the trials and tribulations of what Cook and his crew had to endure.

[Q] How do you think the circumnavigation and transit of Venus trip to Lord Howe helped Australians to understand their history better?
A. Endeavour is a very unique vessel as it is both an operational sailing vessel and a floating museum. Bringing this to the communities around Australia has ensured that the Australian National Maritime Museum has brought the story of Cook and Endeavour to thousands of people across remote and regional Australia. By having a world renowned replica of Cook’s vessel we’re effectively recreating history itself in a three dimensional perspective. One can read the books and see the movies but to experience this firsthand is a very unique way of understanding history.

[Q] After so many months at sea, how do think our convict and immigrant ancestors would have felt stepping on dry land again?
A. From the experiences that I have encountered at sea I can only imagine for the non-seafarer what a great sense of relief they would have felt stepping on to dry land. Having the space to move, somewhat more privacy and independence on land without the fear and concerns of the ship sinking would be the first relief of stepping ashore, then one could also bring in the connotations of a religious nature as with all the hardships that they would have encountered one would have to thank "someone" for their safe arrival.

Thanks to Australian National Maritime Museum and Captain Ross for talking to us, and we look forward to hearing about the next voyages planned for the piece of Australian history that is the HMB Endeavour. 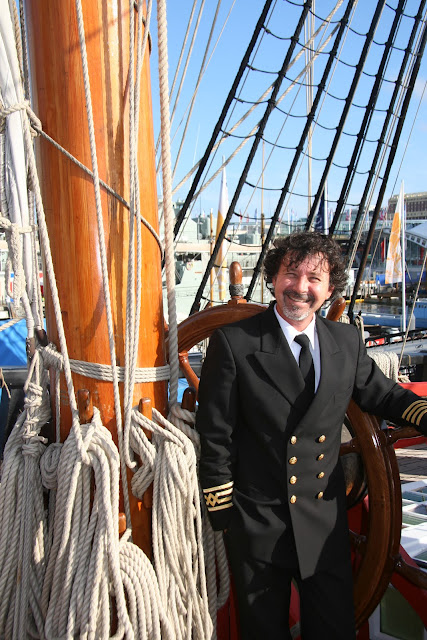 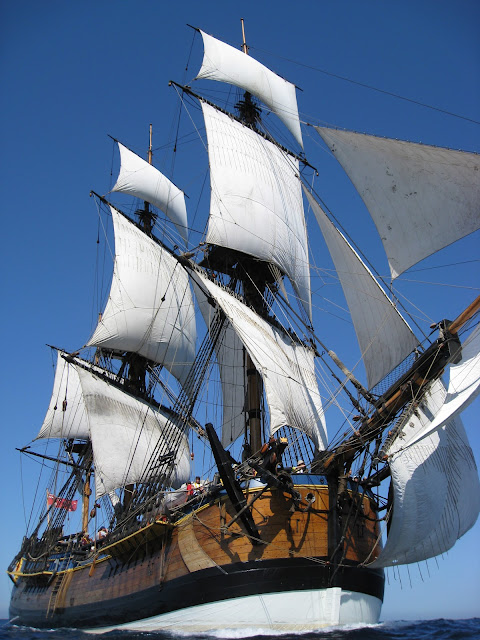 Posted by Inside History magazine at 12:22 PM