Remembering the attack on HMAS Kuttabul

Next year is the 70th Anniversary of the sinking of HMAS Kuttabul. On 31 May 1942 three Japanese midget submarines launched an attack on vessels in Sydney Harbour, shaking the Australian population to the core. This audacious attack struck the converted ferry HMAS Kuttabul with a torpedo and 21 men were killed.

It is believed that the 21 Naval Ratings whom lost their lives aboard the ill-fated HMAS Kuttabul were unwitting victims aboard a target, not of the Japanese choosing. The intended target of Midget Submarine M24 during this Japanese raid was the American Heavy Cruiser; U.S.S. Chicago which had been spotted by a Japanese observation plane launched by the ‘mother’ submarine I-24 the previous day. Unfortunately any other large allied vessel was fair game. However a former harbour ferry, converted into a Naval Depot ship would not be worth wasting a torpedo on, especially when each midget sub only carried two torpedoes each.

Findmypast.com.au is looking for the descendants of the men that perished on this vessel. On 31 May 2012, a commemoration ceremony will take place to remember the 21 men who lost their lives on this day. We would like to connect the descendants with the organisers, so that they can be involved in this special event.

Gary Traynor, Project Officer of the Kuttabul Commemoration Project commented: “The loss of any serviceman during a time of war is tragic, and no single sacrifice deserves to be classed as more important than another. What sets this small group of men apart, is the fact that their loss took place in what was considered at that time, to be a relatively safe haven in Sydney Harbour. The names of these 21 sailors have been recorded on a few small memorials, however very little else is known about them. On the 70th Anniversary of their death, it is hoped that their unwitting part played in this attack upon Sydney Harbour will be remembered and their story told.  Making contact with the descendants of each man is a fundamental part of this commemoration, for nobody can tell the story of their ancestor, better than the families who still remember and mourn their loss. We have been so pleased to work with findmypast.com.au to help us to make contact, and have already had some success”.

Emma Kelly, Marketing Executive at findmypast.com.au: “This commemoration is such a wonderful opportunity to honour these brave sailors that lost their lives serving their country. We are so pleased to support this event and find as many descendants of these fallen men as possible.”

With the support of the Royal Australian Navy, this special ceremony will honour the lives lost during this tragic event. The proceeds of this commemoration will go to Legacy Australia, who cares for widows and orphaned children of servicemen and women who have lost their lives as a result of military service.

Please email findmypast, if you are a descendant of one of these men or if you have any information. 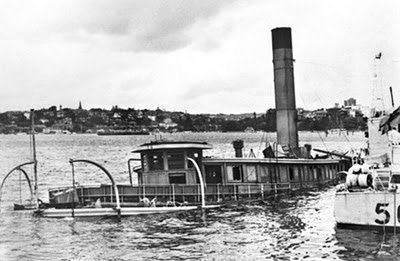 HMAS Kuttabul in Sydney Harbour after the Japanese midget submarine attack
Posted by Inside History magazine at 3:01 PM