I know you're enjoying the new ABC series, Who's Been Sleeping In My House, and want to find out more about your house! I know we are and do!

The essential sources to assist in your investigation of the history of your property are the Sands Directories. These were the city-wide address book of the day in use in New South Wales, South Australia and Victoria. In Queensland, Tasmania and Western Australia a similar directory was in use, and were published by either the Post Office or H. Wise & Co. 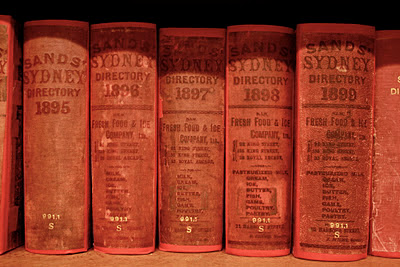 Sands Directories | Source: Royal Australian Historical Society Library, Sydney
Sands Directories: Sydney and New South Wales, Australia, 1858-1932
Each issue of the Directory listed householders, businesses, public institutions and officials of the entire Sydney area. The two major components of the Directory were the 'Alphabetical' and the 'Suburban' sections. The first consisted of a single alphabetical sequence of the names of householders, business houses and major organisations, with the address of the associated premises attached. The suburban section provided similar information arranged variously by suburb, locality or local government area as the Directory developed.

The street-by-street listing of householders in Sands is useful for undertaking research on the history of properties. The type of information included is:

They are useful in listing the residents of a building, although they may not necessarily be the owners of the property. They also help confirm the date of the house. The easiest way to do this research is to simply take a later volume of the directory and go back until your house no longer appears. You may come across a reference to the property being "vacant" or "house under construction". If so, it's likely your house will appear the following year. The first year in which a property appears in Sands may be considered an indication of when a piece of land was first developed but be cautious, the first listing may in fact be after a period of omission e.g. if the property was vacant for some time.


However, directories are not without their problems. Information was often a year behind and inclusion in them was not compulsory - the fee for being listed putting many off. Other problems identified by the Royal Australian Historical Society, says the society's librarian Donna Newton, include:
Where do I find a Sands Directory?

As with all research, start with your local library. These fine institutions may have hard copies or microfiche of the originals, and will likely have free access to Ancestry.com.au or findmypast.com.au, which both have Sands records from various states as part of their collections.

Use the amazing Trove to find a library near you stocking the directory.

Beautiful hard copies of the Sands Directories are available at the Royal Australian Historical Society, at History House, 133 Macquarie Street, Sydney and of course, you can find the Sands at:


Directories across the states:
The staple sources for most family history research should also not be overlooked in house history research. And while census returns, electorial roles and birth, death and marriage certificates may repeat a lot of information you'll find in the rate books and directories, they may just add that detail which brings your house to life. Good hunting!
Posted by Inside History magazine at 6:27 PM