Another grave tale from the Klondike by Robin McLachlan 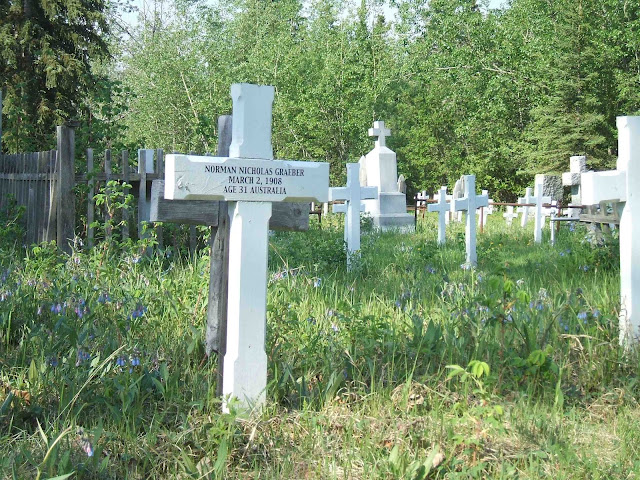 Welcome to my Klondike blog. I expect you have come here after reading "Grave Stories from the Klondike" in the May-Jun 2012 issue of Inside History. As promised, the story of Norman Nicholas Graeber is told below.

As I recounted in the article, my prospecting wander through the Dawson City cemetery in Canada brought me to Graeber’s grave, a find that inspired me to delve into the story of Australians and New Zealanders on the Klondike. Norman Nicholas Graeber is unusual in that he didn’t drift off to another goldfield after a season or two, but put down roots in the Klondike. He is very likely the “Nicholas Graeber” on No.10 Soap Creek, a claim that was “in the pay”. In the summer of 1902, the mine was employing a crew of eight men and future prospects looked good.

By 1904, Norman had done well enough to trade the hard life of the miner for that of a Dawson City businessman. He bought the Bonanza Livery Stables. It was also around this time he may have courted Catie Couture (born 1880), a French Canadian girl from Selkirk, Manitoba. Catie was on the Klondike with members of her family. Norman and Catie (her full name being Sarah Anne Catherine) were married in Dawson’s Roman Catholic Church on 10 July 1906. Her brother Alfred was a witness.

Marrying Catie may have presented Aussie Norm with something of a culture shock. She was from the sizeable French Canadian community on the Klondike, socially separate in language and culture. Even Dawson’s Catholic Church was largely a French Canadian institution, with priests from Quebec and records kept in French. If Norman was not bicultural at the time of marriage, lessons in French culture surely followed.

There was time, however, for recreational activities other than just French Canadian folk dancing. A son, Anthony Gerald, was born on 23 June 1907. Aunt Eléonore Couture was godmother at his baptism on 6 July. Norman’s story reads as a classic gold rush tale of hard won success opening the way onto a happy and full life. Alas, life can be like the run of quartz reef that for a time gives much but in truth promises nothing. Baby Anthony lived for only a month. His tiny grave lies only a few rows away from that of his father, who died from appendicitis in April of the following year. 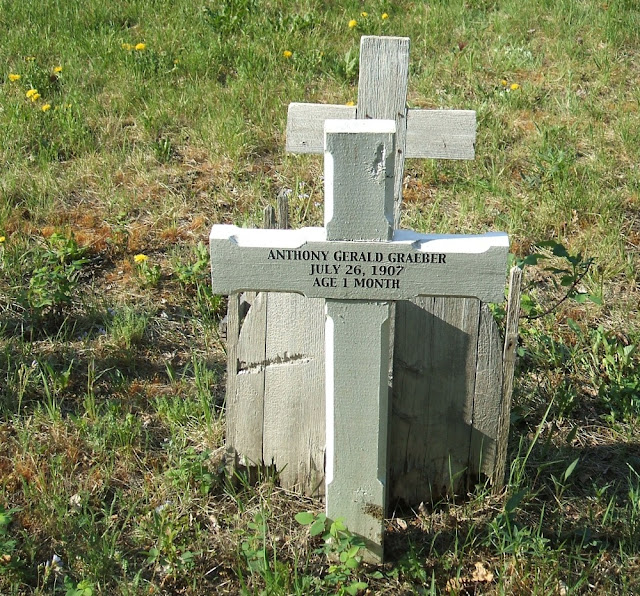 But for a few words in the church register, I might have ended my tale here. The register for St Mary’s Church, or Église Ste-Marie, records in French that Norman was a widower, "vf de Helen Cameron”, at the time of his marriage. When this entry is combined with other fragments of evidence, the suspicion arises that Norman Nicholas Graeber may not have been perfectly truthful about his past. He may have been Nicholas J. Graeber, a former Omeo hotelkeeper and father of three. In 1896, the divorce court had granted his wife, Ellen (Cameron), a legal separation on the grounds of his repeated adultery. Ellen died in 1942, as the widow of Nicholas. If Norman is Nicholas and Helen is Ellen, then Catie has a bigamist as her husband.

Taking on a new identity was not unknown on the Klondike, where even today you wait for an invitation before asking too many questions. Perhaps given the passage of time we can though take the liberty of asking Norman and Nicholas whether they are the same Mr. Graeber.

I have created “family histories” for both men on ancestry.com.au where you will find the sources used for this blog together with evidence for their common identity.

Norman Nicholas Graeber is just one, or perhaps two, of more than 700 Australians and New Zealanders who went to the Klondike in 1897-99 so far identified by the Diggers on the Klondike project. If you should know of an Australian or New Zealand Klondiker, you are invited to contact me on rmclachlan[at]csu.edu.au.
Posted by Inside History magazine at 10:51 AM