On Monday, May 21, the HMB Endeavour returned to Sydney from its 2011-12 circumnavigation of Australia. Part of the Australian National Maritime Museum collection, the HMB Endeavour is a 44 metre Australian built replica of Captain Cook's ship Endeavour. She was built based on the 18th century survey completed by the Royal Navy service and held at the UK's National Maritime Museum in Greenwich, London. We all know about Captain Cook but do we know that his epic world circumnavigation of 1768-71, which took in Tahiti, Pacific Islands, NZ and Australia, was a voyage of scientific discovery and not all about expansion of the then British Empire?

The HMB Endeavour is now mored in Darling Harbour but is closed for refit, getting ready for its' next voyage for the Transit of Venus to Lord Howe Island. Don't worry though, she will be open to the public again in July.

Stay tuned for more stories on the HMB Endeavour and 18th century sea travel soon! Until then, here are our photos from the Endeavour's return. 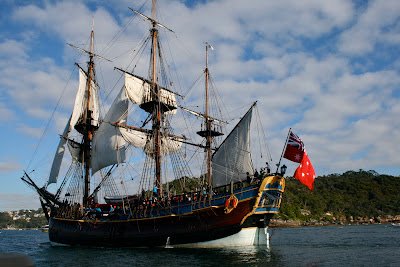 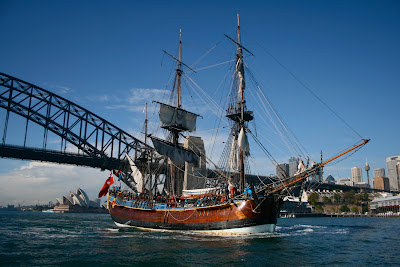 Posted by Inside History magazine at 12:32 PM