Here is the next instalment in our series of Grave Tales. The 4th in the series, sees Ancestry's Brad Argent in Melbourne and walking the well kept rows of the Cheltenham Pioneer Cemetery. It was a cold winter's day, unlike the hot summer's day that Alan Burnett lost his life in 1901.

Don't forget to read instalments 1-3, the links are at the finish of this tale, and find a sample of what history awaits to be discovered when you go walking.

It was a cold and rainy afternoon when I ventured into Cheltenham Pioneer Cemetery in Melbourne – perfect weather to mingle with the departed.

This beautiful cemetery is located about 20kms south east of Melbourne’s CBD and rests against the railway line that was cut through in the 1880s. The grounds are well kept and despite the rain I was able to get around with relative ease. The grave stones and monuments are in very good order, thanks no doubt to the wonderful work of the Friends of Cheltenham and Regional Cemeteries.

Whilst the rain impeded my usual wandering approach, I still managed to get around the ground relatively protected from the water thanks to the boles of some of the larger trees and it was from under the branches of one such tree that I spied the final home of the Burnetts.

Many and varied things draw my attention to a particular gravestone but the thing that spoke to me this time was the ages of its occupants: 95, 87, 90 and 16 – the octogenarian and nonagenarians each emphasising the lost potential of passing at only 16.

Alan Gordon Edgar Burnett was the first child Henry Halford and Frances Rosina Burnett [nee Monk]. They married in 1884 and Alan was born a short time later in 1885. Henry and Fanny went on to have three more children Ellenor Mary, Mildred May and Cedric Henry.

Sunday January 20, 1901 was a very warm summer’s day in Melbourne. The previous day had seen the temperature hit 98 fahrenheit [36 Celsius] and perhaps the prospect of yet another hot day led Alan and his workmate Ernest Symons down to the Warragul Public Baths. Alan and Ernest were engaged as watchmakers for the Jeweller and Optician H.J Day.

According to Ernest’s account of events they went to the baths at about 11am – Sunday’s temperature was rising to a high of 87 fahrenheit [30 Celsius]. Ernest went in first and then swam to the jetty waiting for Alan. Alan dived in feet first and when he surfaced a few moments later he appeared to be struggling. Ernest tried to assist Alan, but in a panic Alan tried to drag him down. Edgar sought assistance but to no avail. Alan’s life ended at the Warragul Public Baths after just 16 summers.

No doubt the years crept slowly by for his parents, Henry and Frances, who were long-time residents of Cheltenham and lived on the same road as the Cemetery. But in the end they were reunited with Alan – Frances first, and then, just under a year later in 1945, Henry joined them both.

Alan’s younger brother, Cedric – a veteran of both world wars, joined them all some 87 years after the tragedy at Warragul.

Read the previous instalments in the series of Grave Tales:
[1]  Story of Strange Butson Hartigan
[2]  The murder of William Hird
[3]  The loss of the 2 Graham girls 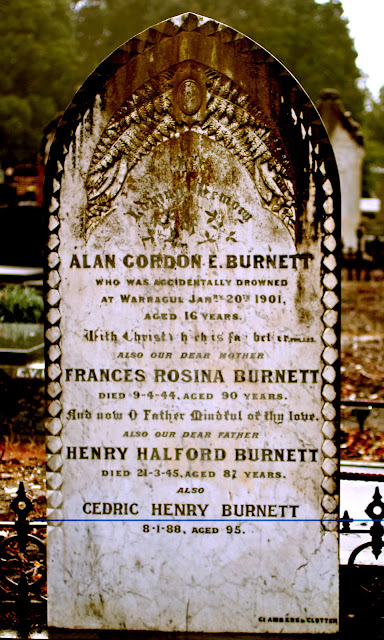 Posted by Inside History magazine at 2:19 PM