Remembrance and discovery: the November-December edition (issue 13) of Inside History has arrived!
And much more – in fact, 76 pages of terrific features, practical information on genealogy, chances to network with other family historians, and book and app reviews. On sale now online - click here to buy!

Issue 14 is available in newsagents nationally - click here to see where. If your local newsagent doesn't stock us though, then they should be able to put a standing order in for you from Gordon & Gotch [G&G] - our title number is 11904 and G&G is on 1300 650 66, if your agent asks.  Once your newsagent sends in your request, we'll make sure that our next Issue 15: Mar-Apr is sent there for you!

From Lost Diggers to the latest historical discoveries, Issue 13 of Inside History commemorates Remembrance Day with a military theme, showcasing our soldiers’ bravery in the world wars — and how we can learn from, and contribute to, the ongoing research being done in their memory.

Get the inside scoop on the Lost Diggers collection: in our exclusive Q&A, investigative journalist and author of The Lost Diggers, Ross Coulthart, reveals how he unearthed thousands of glass plate images of Aussie WWI soldiers in Vignacourt, France, plus the most valuable research sources that helped him trace the Anzacs’ identities.

Experts from the Australian War Memorial and the Museum of New Zealand talk us through the process of identifying unknown WWI soldiers, and spotlight their respective methods and successes in uncovering the names and stories behind photographed Anzacs.

We delve into a little-known war tragedy that struck in 1940, which came to solve a bittersweet mystery for a widow who’d wondered for more than 70 years how the husband she’d just recently married had died in World War II. In another fascinating breakthrough, Inside History contributor Dr Robin McLachlan shares his discovery of two Macquarie-era maps charting a lost city in inland NSW, which is believed to lie beneath present-day Bathurst.

Make exciting discoveries of your own with our guide to  findmypast and its new World Collection, boasting over 1.5 billion records. We also introduce a new National Archives of Australia website displaying over 20,000 unidentified photographs of migrants who arrived in Australian ports after World War II — you’ll soon be scanning the faces on Destination Australia!

And, just in time for the holiday season, we sift through Trove to glean snapshots of festive seasons past — discover the customs, quirks and Christmas tucker that may have featured in your ancestors’ celebrations.

Packed as always with in-depth family history research advice, the latest news and events, and features on Australia’s social history and heritage, Inside History is a bi-monthly magazine for people who are passionate about the past. It’s available from newsagents nationally, on iPad via Apple Newsstand, and for Android and desktop computers through Zinio. Or subscribe and have it delivered straight to your door.

Authors to look out for in Issue 13: 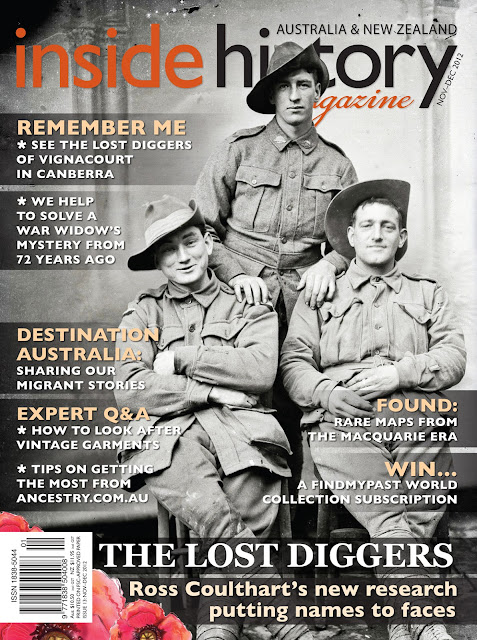 Posted by Inside History magazine at 11:37 PM