Here is the next instalment in our series of Grave Tales, from Brad Argent. It's another dark and sad tale uncovered in a cemetery just around the corner and a part of our rich local history. You'll never know what you'll find in your next visit to our shared past and your local cemetery.

William Hird came to Sydney in July of 1882 on board the Samuel Plimsoll.  With him were his wife, Isabella and their six children (three boys and three girls).  Originally from Scotland, the Hirds spent some time in Yorkshire before making their way to Australia.

William was a sergeant with the East Riding police before immigrating, and upon arrival in he enlisted in the local constabulary and was stationed at Canterbury, about 12 kilometres south west of Sydney.

William was on duty until about 1am on the morning of August 13, 1885.  He became involved in scuffle with two men – Joseph Thompson and Ellis Birch – and one axe.  It didn’t end well for William.  His body was found later that morning just off the bridge that spans the Cook’s River in Canterbury.

William was a much loved member of the, then small, community.  On the following Saturday afternoon William Hird, 32, was laid to rest in the Cemetery attached to St. Paul’s Anglican Church.  There were over 400 mourners in attendance.

But the grave stone in the picture tells an even sadder story.  William’s wife Isabella had already endured the loss of their youngest child, John, shortly after their arrival in Sydney in 1882.  Three months after William’s death her eldest son, George, also passed away. Isabella too ‘shuffled off this mortal coil’ though she was to live for another 37 years.

When I come across headstones like this I pause to think, not only about the tragedy of lives cut short, but of the grief for those left to remember.

Read the first instalment in the series - Story of Strange Butson Hartigan! 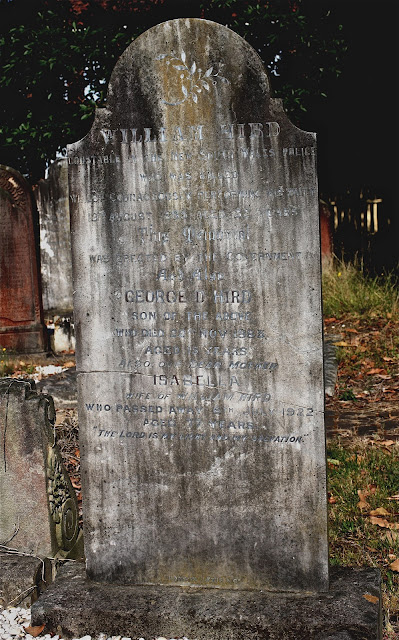 Posted by Inside History magazine at 4:36 PM