Grave Tales 3 :: The loss of the 2 Graham girls

Here is the next instalment in our series of Grave Tales. In this edition, Brad Argent tells us of his visit to a small cemetery in NSW's Shoalhaven area and the search that resulted for the descendants of the two poor farming girls buried there. He found them. Start your local research today.

I was taking a short break in Kangaroo Valley with my family recently and couldn’t resist taking a stroll through the local cemetery. My usual approach is to let my feet take me where they will and there, in dappled light beneath a sparse shrub, were two crosses with the names Helen and Kate Graham. Time worn and obviously hand crafted, I was struck by the similarities of the crosses – same surname, similar age of death and a decade apart. 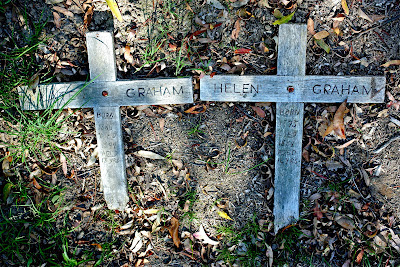 Helen, known officially as Jane Helen Kate Graham, was born in the Shoalhaven area in 1875 to John Graham and Mary Merchant. Helen She was the fourth child and second daughter for farmers John and Mary.

Life on a farm meant that everyone in the family worked. On August 10, 1889 fourteen year old Helen, with her younger sister Florence, aged ten, were minding some cows in a paddock near the house. For reasons unknown Helen lit a fire and her dress caught alight. She died some hours later and was buried in an unmarked grave.

Kate, formally Kate Martha Matilda Graham, was born in the Shoalhaven in 1886 - John and Mary’s eighth child and sixth daughter. Kate died of rheumatic fever when she was just 13 years old.

The anguish of losing two young children is something I cannot begin to understand. I hugged my kids tighter when I got back to the house that day.

After doing a little research it occurred to me that the wooden crosses were unlikely to have been original, so I sought more information on Ancestry.com.au and found the Latham/Madge Family Tree. I reached out to Mable, the tree’s owner. In less than 24hrs, Mable – a descendent of Kate and Helen’s older brother Archy - got back to me with details on the girls.

Mable said that it was Helen’s father John and`her brother Archy who found the badly burnt body. She also told me that Kate was a favourite of Archy’s. Mable also shed some light on the crosses. They were erected a few years ago by members of the family as the burials were in unmarked graves, or graves whose markings had long since become erased. Mable also supplied the lovely photo of John, Mary and family you see below. My thanks to Mable for helping me tell this story. 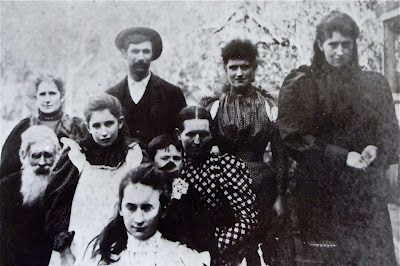 Read the previous instalments in the series of Grave Tales:
[1]  Story of Strange Butson Hartigan
[2]  The murder of William Hird

Posted by Inside History magazine at 8:22 PM