Here is the next instalment in our series of Grave Tales. The 5th in the series sees Ancestry's Brad Argent in Quaama Cemetery, just north of Bega in New South Wales, following Adam Engelman's journey from Germany, to being Australian and marrying "Big Jack" the bushranger's daughter.

Don't forget to read instalments 1-4, the links are at the finish of this tale, and find a sample of what history awaits to be discovered when you go walking.

Just north of Bega, surrounded by national parks and state forests, rests the small New South Wales community of Quaama. This hamlet was established in the latter half of the 19th century and formerly called ‘Dry River’. I’m unsure when they changed their name to Quaama – or why – but it was originally spelt with an extra ‘a’ on the end. I assume that someone believed that was one ‘a’ too many.

It was a beautiful spring morning when I found myself searching for Quaama’s cemetery. It lies south east of the bucolic village, in a gently sloping field behind the last of the houses. As I parked my car and entered the cemetery I couldn’t escape the feeling that I was interloping – there was a palpable ‘spirit of place’ here.

The cemetery has a few marked burials in what I assumed were family clusters, but the one that caught my eye stood all alone, some considerable distance from the entrance.

Adam Engelman(n) was born in Germany in February 1842, the second son of Heinrich and Agnes Engelmann (nee Dumm). He came to Australia with his parents, his older brother Martin and his younger sisters Agnes, Catherine and Elizabetha in March of 1855. The voyage must have been difficult for the Engelmanns as the infant Elizabetha died on the voyage.

Adam and his family were assisted immigrants brought to Australia by William Macarthur, the youngest son of John and Elizabeth Macarthur. As his father and older brother were both ‘Vine Dressers’ they no doubt went to work on Macarthur’s extensive vineyards in Camden, New South Wales.

At Bega in September of 1864 Adam married Celia Eden Hayden, daughter of the convict and bushranger known as “Big Jack”. Celia and Adam had 15 children, though it wasn’t until 1872 that they moved to Quaama.

Adam was naturalised in early 1876, and his brother Martin followed suit the following year – their father Heinrich having undergone the process just a few years after arriving. It must have troubled Adam – as it must have for all German-born Australians - to see the outbreak of the First World War. How sad that he did not live to see it end, dying only days before the official cessation of hostilities.

Sad, too, that Adam rests alone; an isolated grave in an isolated burial ground. In life he would have been surrounded by family, but now he is deserted – or so it would appear. Many of Adam’s family remained at Quaama – his wife Celia passed away there in 1935 – and perhaps they are buried there too, resting in graves unmarked.

Read the previous instalments in the series of Grave Tales:
[1]  Story of Strange Butson Hartigan
[2]  The murder of William Hird
[3]  The loss of the 2 Graham girls
[4]  Fatality at Warragul. A youth drowned * 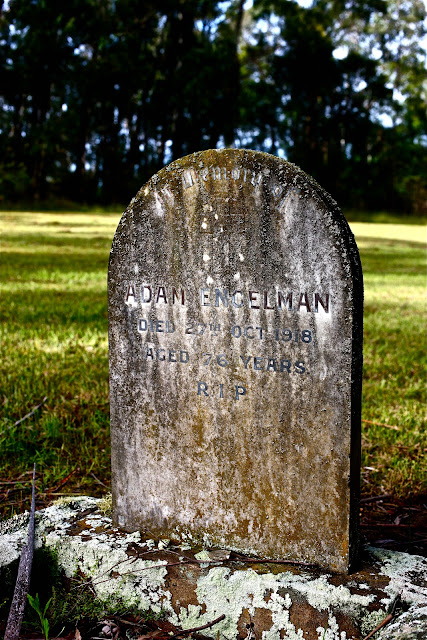 Posted by Inside History magazine at 11:16 AM