This week we talk to Peter Williams, author of The Kokoda Campaign 1942: Myth and Reality. Peter is a researcher for the Defence Honours and Awards Tribunal and is a military historian for the Darwin Military Museum. His new book combines narrative and detailed analysis, to re-evaluate the Kokoda campaign of 1942 and should be considered a must-read for anyone who is interested in Kokoda.

IHM. Q. What inspired you to start researching and writing your book on Kokoda?
IHM. Q. What resources did you come across when researching your books that have not been widely used by others?
IHM. Q. Why is your Japanese evidence so important to the book.
IHM. Q. What is the main point you make in The Kokoda Campaign 1942, myth and reality?
IHM. Q. Which stories amused you the most in the course of your research?
IHM. Q. If you could track down one thing you haven’t yet managed to find out, what would it be?
IHM. Q. What’s your best tip for people wanting to write a history book of their own?
IHM. Q. How do you know when you’ve written a good history book? 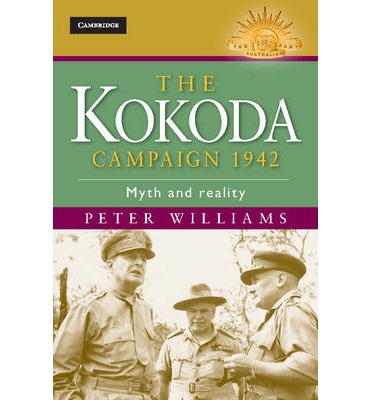 Extract [Page 1] from The Kokoda Campaign 1942.Myth and Reality, Cambridge University Press, 2012 by Peter Williams
"This book is an examination of the Kokoda campaign – from the Japanese landing in Papua in July 1942 and their advance along the Kokoda Track, to their defeat at Oivi–Gorari in November. The Kokoda campaign is catching up with Gallipoli in popularity, as is apparent from the number of books on it that have appeared in the past twenty-odd years and the thousands of Australians who now walk the Kokoda Track each year. As the events of 1915 pass into distant memory, it is possible that Kokoda might come to rival Gallipoli as the representative Australian military experience. While there are positive aspects to this, as its popularity increases errors in the Kokoda story have a tendency to be repeated until they take on the outward appearance of fact. Other aspects of the campaign, some arising from Australian wartime propaganda, have not been subject to postwar investigation. These two strands combine to create the Kokoda myth. Recent popular accounts, concerned more with colour than precision, perpetuate the myth.

Numbers are important in war. To have a good prospect of success the attacker should usually have more men than the defender. The firepower of modern weapons so advantage a defender that a three-to-one local superiority is said to be needed to be reasonably certain of success if all other factors are equal. A two-to-one advantage provides a lesser chance of success but will sometimes be enough, and one to one is usually not enough for the attacker to prevail. When numbers alone do not explain victory or defeat – and it is rarely as simple as that – we look to the quality of the troops, their weapons, morale and supply, and how well they were commanded. Each of these elements can powerfully increase fighting power or, to use terms not in use in 1942, they are force multipliers that enhance combat effectiveness. For example, if the attacker’s men were of higher quality than those of the defender, or if the attacker had much more artillery or was better supplied, then he might not need any superiority in numbers to win. According to the Kokoda myth, it was the large Japanese numerical superiority that enabled them to advance as far as they did towards Port Moresby. If that is not true then other reasons for the series of Australian defeats on the Kokoda Track between July and September 1942 would be required. One possibility is that the Japanese were qualitatively superior to the Australians.

A central fact of land warfare in the first year of the Japanese offensive in the Pacific from December 1941 is that, man for man, the Japanese proved to be better soldiers than those who opposed them. The proof is that up to the second half of 1942 the Japanese rarely had superior numbers engaged in land battles, yet they rarely lost one. They achieved their victories in Burma, the Dutch East Indies, during the Malayan campaign, in the final battle at Singapore and in the Philippines without a numerical advantage. Only when the Allies had a very considerable superiority, as at Milne Bay and Guadalcanal, were they able to defeat the Japanese. The Kokoda campaign fits this pattern.

It might not be too much to say that most issues of the campaign ought to be reappraised if it can be shown that the Japanese engaged in the battles along the Kokoda Track were many fewer than has been believed. This word engaged holds a clue because, while the Nankai Shitai was more than 16 000 strong, the number the Japanese actually committed to battle on the Kokoda Track, which runs from Kokoda south over the Owen Stanley Range towards Port Moresby, was much smaller.  The problem for the myth is that of a 16 000-strong Japanese force, of which 7000 were fighting troops, no more than 3500 of these actually advanced along the Kokoda Track.

What has occurred in postwar Australian historiography might have something to do with the saying that the victors write the history. This is true as far as it goes, but much of what the victor later writes might not be accurate as it can arise out of his own wartime propaganda. The defeated too has wartime propaganda, but this is swept away postwar as it is immediately seen for what it usually is – falsehood. The victor’s propaganda is not subject to the same rigorous reassessment and has a chance to seep into later accounts and, over time, become entrenched there. Two examples of Australian wartime propaganda still read today, and which stress the Japanese numerical superiority, are George Johnston’s New Guinea Diary and Osmar White’s Green Armour, published in 1943 and 1945 respectively.

The attempt to debunk Kokoda myths is not intended to denigrate the Australians who fought on the Kokoda Track. Their bravery and fortitude is not in question. It is rather that the current interpretation of the campaign is invalid. The Kokoda Campaign 1942, myth and reality, is an attempt to set aside the myth of Kokoda and replace it with the reality and, as the evidence that undoes the myth comes mainly from Japanese sources, it follows that more than half the book concerns the Nankai Shitai. The unfortunate contribution of Australian popular military history to the strength of the Kokoda myth was discussed earlier, but the problem is broader than that. The Kokoda myth has arisen because there exists a gap in Australian historiography: a wide range of Japanese sources have not hitherto been examined, although Raymond Paull, Lex McAulay and Paul Ham have all made some effort to do so. The result is a lack of balance in our understanding of the Kokoda campaign, a natural outcome, for if we try to explain an historical event involving two belligerents using sources from only one of them, then we should hardly expect to get it right".

Posted by Inside History magazine at 8:04 PM